Rainbow Loom: History in the Making

Girls, boys, and even their parents have been 'hooked' on the craze that is Rainbow Loom. And yet barely two years have passed since this widely successful product first made a splash in the marketplace.

Where did it all start? In the unlikely place of former Nissan engineer Cheong Choon Ng's garage. His daughters already enjoyed looming with rubber bands and he wanted share the enjoyment with them - but his fingers were too big. One day, Ng, with his engineer's hat on, took to the family garage and invented a device out of pins and a block of wood. This allowed him to create the looms just like his daughters. And what's more, after a few upgrades to the device he was able to design rubber band bracelets even more elaborately than his daughters could by hand. 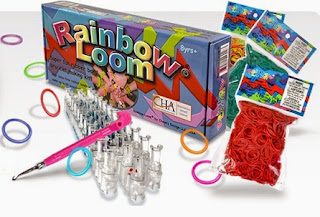 His eldest daughter then suggested taking Rainbow Loom to the public. With little money, the big dream of Rainbow Loom was put into action. Ng and family launched themselves into the business world, patenting the looming device and creating a kit consisting of 1 plastic loom and 600 rainbow rubber bands.

Ng approached kiosks at the local mall, but only three stores picked up the kit. Many store owners didn't know what to think of it. What was it for? The device was new - never before seen. Ng realised he had to educate the masses.

He created a Youtube channel of videos with his daughters demonstrating elaborate patterns. Now anybody with an internet connection could not only find Rainbow Loom, but also get started making the bracelets. This was better - but still a final push was needed for Rainbow Loom to reach the dizzying heights of success it has now found.

It was barely two years ago that Cindy O'Hara, co-owner of two Learning Express stores in Atlanta, offered to carry the kit. Cindy and staff also assisted on site with the marketing of the kit. They would offer customers to learn how to make a bracelet, and having experienced the magic creation of looming with Rainbow Loom, customers would not only buy the bracelet, but go and tell their friends. Needless to say, the product's popularity sky rocketed, O'Hara started offering free Rainbow Loom classes to customers and advised them to visit Ng's Youtube channel. Kids learned fast and even started creating their own patterns.

Rainbow Loom's success went nationwide and is now for sale at Michaels Stores, a huge arts and crafts store in the US and Canada. Over a million Rainbow Loom kits have now sold. Recently Rainbow Loom crossed the Atlantic and is now available at Tescos, Claires, Amazon and other major retailers in the UK.

Imagine - Ng started out simply wanting to share this fun experience with his daughters and continues in the same manner, sharing the fun with the world. Indeed, he has no intention of selling Rainbow Loom to a larger toy corporation, because, in his own words, "I'm having too much fun."

Now there's an ethos we can relate to! Well done, Cheong Choon Ng and family!

Rainbow Loom is the winner of the 2014 Toy of the Year Awards. Visit Rainbow Loom's website.
Posted by Jolene at 06:30