Disney's Frozen has captured the imagination of children the world over (and those of us who are children at heart). For many months we've offered a complete party package based on the film, where Anna, Elsa, and Olaf come to your party venue and entertain the children. It has proved to be very popular, and shows no signs of falling out of favour! 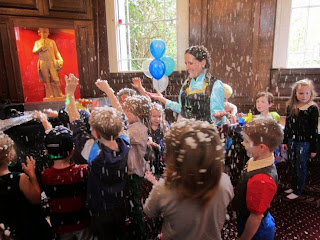 Disney CEO Bob Iger says Frozen merchandise accounts for 9 out of their top 10 best sellers in Disney shops. It's an incredible phenomenon, the likes of which Disney hasn't seen before.

What makes the film so popular? The story hits on timeless themes, has catchy songs ("Do you want to build a snowman?"... you know what comes next!), and characters kids relate to. But don't all of the best children's films in recent history have these qualities? It seems Frozen has something very special about it that can't be quantified.

We certainly appreciate this x-factor quality here at JoJoFun. After all, isn't that what imagination is all about? We love to reside on the spontaneous, fun side of life!

Find Frozen Party Entertainment in London and the surrounding counties.
Posted by Jolene at 07:40