Travelling to Turkey – On a Broom! 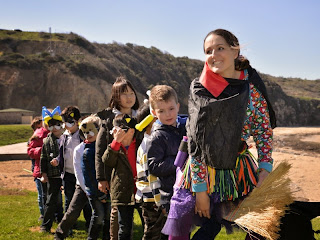 As I gazed out at the Black Sea, sun over-head and a trail of giggling children behind me on the extended broomstick we sat on and ran with, I smiled and thought how fabulously surreal. It was a sight surely to bring smiles to onlookers!

We were running along the cliffs by the Black Sea on a very sunny afternoon acting out “Room On The Broom”, by Julia Davidson. Our client wanted this story to be the theme of his son’s 6th birthday party and to weave this theme throughout the entertainment we provided. The children had masks of cats, dogs, birds, etc. to put them into character and our client narrated the story as we acted it out.

Imagine what the children thought when the dragon appeared from behind the cliffside to capture the witch (which was me) for tea? Delightful swells of screams were echoing along the cliffs! The children chased the dragon away in their magnificent netting; their ‘larger-than-life’ disguise to scare the dragon away and save their friendly witch.

After collecting our pieces of nature in thecauldron to do magic and repair the broken broom, I engaged the children in jaw-dropping “iggity ziggity zaggaty zoom” magic. They soon realised the power of their magic fingers! Before long, the magic broom was repaired in the form of a chocolaty broom cake with its own blazing candles.

After eating pieces of the cake, we played games on the hillside; from parachute games of witches chasing dragons to keeping the frog in the air to relay races. It was the perfect setting to come together for a very special sing-a-long with friends of the witch. Parents delighted in participating with their kids. 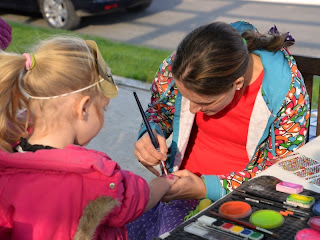 The entertainment finished with lovely hand and face painting with glitter and gems.

Dare I pinch myself to see if this was real?

All I have to say is “Is their room on the broom for an entertainer like me?”